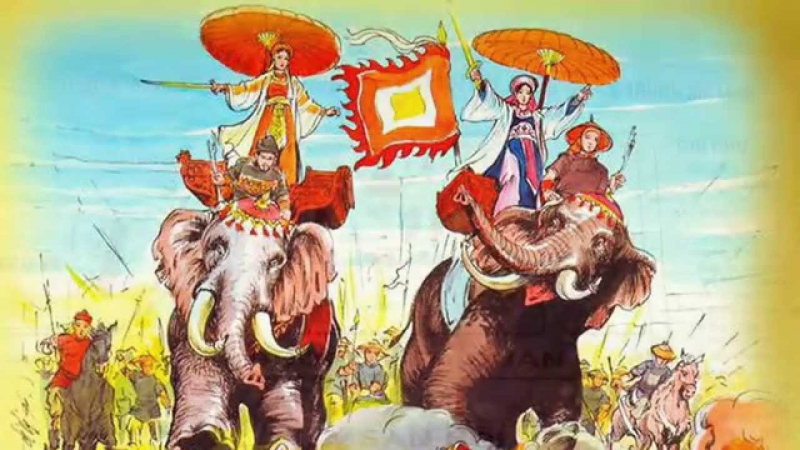 History always remembers the enormous contributions of women who are not only “good at housework” but also “good at domestic work”. The image of a woman who is no longer “behind the door” in resignation but to rise to the top is having the will to rise, having the will to fight for happiness for herself and for the people. Celebrating the Vietnam Women’s Union, let’s look back at those People – the people who made history and went down in history forever.

A great honor for women in our country Hai Ba Trung opening glorious pages of history against foreign invaders, gaining independence for the Fatherland. Two Grandmothers, Trung Trac and Trung Nhi, the daughter of Lac general Me Linh during the Hung King’s reign, paid great attention to teaching their two sons patriotic spirit.

Trung Trac’s husband, Thi Sach, was murdered by Crown Prince To Dinh of the Eastern Han Dynasty. In order to fight against the Han Dynasty’s occupation and avenge her husband, Trung Trac and her brother Trung Nhi waved the flag of rebellion, gathered peasants all over the country to chase To Dinh and rebuild the old inheritance of King Hung. The revolt of the Hai Ba took place in the year 40, the beginning of the first century, Trung Trac became king (called Trung Vuong), the independence lasted for 3 years: Do Ky closed the Me Linh Linh Nam realm, a separate royal court. ta. In 42, a general of the Han Dynasty came to fight our country again. Hai Ba Trung and female generals such as Le Chan, Thanh Thien, Thieu Hoa … fought fiercely, winning many battles. But could not resist the tricks and cunning tricks of the Han Dynasty, so in the end, Hai Ba threw herself into the Hat River to commit suicide. In Dai Viet historical record (1272), Le Van Huu wrote: “Truong Trac and Trung Nhi were women, shouting with a voice that Cuu Chan, Nhat Nam, Hop Pho and 60 foreign cities responded. It is as easy as turning the hand of a hand…!”

Nguyen Thi Minh Khai (1910 – 1941), real name is Nguyen Thi Vinh, born in Vinh Yen commune of Vinh town (Nghe An), attended primary school, joined the student movement, was admitted to the Party in 1930. Enthusiastic about studying Theoretically, she was one of the women cadres directly mentored by President Ho Chi Minh, then Minh Khai was trained in Marxism-Leninism in the Soviet Union. Under the name Phan Lan, she was the youngest delegate to the 7th Communist International Congress in Moscow, gave her famous speech at the 40th session: “We, peasant women People and workers in the Eastern, colonial and semi-colonial regions, who suffer more than our Western European comrades, we have entered the path of revolutionary struggle.

She was also the first Vietnamese youth delegate to attend the Youth International in 1935. As the first Secretary of the Saigon – Cholon Provincial Party Committee, she paid great attention to training cadres and workers, building revolutionary bases. In the countryside, consciously determined to rise to the role of revolutionary leader, Minh Khai showed his will to overcome all his own pains and difficulties, when giving birth to a daughter, when her husband, Comrade Le Hong Phong, was arrested. On August 28, 1941, the French colonial government shot her and her comrades Nguyen Van Cu, Ha Huy Tap… Standing on a high hill, she snatched the black blindfold and threw it away and said loudly: “Dear compatriots, We must destroy the feudal empire to live a happy life. Long live the Indochinese Communist Party! Long live the Vietnamese revolution!

Vo Thi Sau (1037 – 1953), from Ba Ria, she was called “The Red Earth Daughter”. When the French invaders invaded the homeland, Vo Thi Sau, 12 years old, threw grenades and killed three French commanders. She is known for her intelligence, commando and special communications. Missed assassination of the Viet Cong Doc Phu Tong, Vo Thi Sau was arrested by the French at the age of 15. While in prison, she continued her revolutionary activities. In December 1952, the French took her to Con Dao and imprisoned her in the “White Stone” prison. Loved to dance and sing since childhood, the death penalty did not stop her from singing. When the enemy shot her, sent a priest to baptize, she scolded: “I’m a patriot, I’m not guilty, only you guys are robbing my country, killing my people is the guilty one.”

Before her death, she chanted: “Long live Vietnam! Long live Uncle Ho!” Vo Thi Sau died when he was less than 17 years old. In 1993, the State posthumously awarded her the title of Hero of the Armed Forces and the First Class Victory Medal.

Nguyen Thi Chien was born in 1930 in Kien Xuong district, Thai Binh province. During the guerrilla movement in the temporarily occupied area, in the early days of the resistance war against the French from 1946 to 1948, she was both the secretary of women and the commander of a guerrilla platoon in the commune. In 1950, she used mines to destroy an enemy squad on patrol on Route 39. It was the first sound of mines to warn the enemy and awaken the people’s armed struggle movement. man, she died and resurrected many times, but the enemy could not exploit anything and had to release her. When she returned to her hometown, she was assigned tasks in the guerrilla team by the cell. In addition to practicing guarding, harassing and fighting enemies, she also led her sisters to reclaim land, plant rice, and raise chickens to earn money to buy weapons.

In 1951, with bare hands, she used a trick to capture an enemy squad in the middle of the market, obtaining 7 guns. After that, she used a trick to capture the French officer who was in command during their raid in the commune. In 1952, during the first National Heroic Emulation Congress, she was presented with a handgun by President Ho Chi Minh, was awarded the First-class Resistance Medal, the Third-class Military Merit Medal, and was awarded the British Commendation. mighty armed forces.

Comrade Dinh Thi Van Formerly a district member of the former Xuan Truong district and in the Executive Committee of the Provincial Women’s Union of Nam Dinh province. She did not undergo any professional training in intelligence, but she successfully completed the task of an intelligence officer. Comrade has gone deep into the intelligence organization during the French occupation of Hanoi and the period when the US puppets occupied Saigon, exploiting valuable and strategic military documents to serve the cause of fighting against aggression and solving the problem of aggression. launch the country.

All the great achievements of intelligence Dinh Thi Van The achievement was of strategic importance for the Central Committee to promptly direct the fight against the American puppets. These very secret documents were not purchased by her but were the result of persuasion, persuasion, and persistent mobilization of the masses, based on the “people-first” consciousness. Intelligence officer Dinh Thi Van was honored to be conferred the title of Hero of the People’s Armed Forces by the Party and State, and after the end of the resistance war against the US to save the country, liberate the South and reunify the country, he was conferred by the Ministry of National Defense. rank of Colonel.

Sister’s picture Vo Thi Thang Standing in the middle of the two rows of soldiers, smiling calmly, is the image of a patriotic student, a commando soldier with a “victory smile” that a Japanese reporter captured during the US trial. puppet in 1968. At the age of 11, she worked as a liaison for the revolution and then, at the age of 17, she joined the student movement, Saigon youth and students to build a standard political base. In preparation for the offensive in the year of Mau Than (1968), she also participated in the Workers’ Movement and the armed forces in the heart of the city.

When she was on a mission to clear the space in Phu Lam, she was captured by the enemy. They sentenced her to 20 years of hard labor and answered them with a smile and a challenge: “Will your government survive for 20 years to imprison me?”. That famous saying is an encouragement to the whole people to fight the enemy. After six years of torture and torture, Comrade and many other comrades did not succumb to the violent power of the enemy. At the prison, under difficult circumstances, he used it as an environment to practice and test his dignity, will and loyalty to the nation and the Fatherland.

The brave patriotic student’s bravery has been an example for many communist soldiers to follow. By March 1973, according to the Paris Agreement, the enemy had to return the imprisoned revolutionary soldiers. When he was released from prison, he still held his head high with the posture of a winner. After the peace, comrade always kept in mind the teachings of President Ho Chi Minh, always followed the guidelines of the Party and State, listened to the voice of the people when elected as a member of the National Assembly. Later, he took on the task of leading the tourism industry and making the industry a spearhead in the country’s economy.

Ms. Nguyen Thi Dinh was born in 1920 in Luong Hoa commune, Ben Tre province. At the age of 16, he joined the revolution, at the age of 18 he was admitted to the Indochinese Communist Party. After the uprising, she was one of the first to bring weapons through the sea to the South during the resistance war. In 1945, she was appointed by the Party Central Committee to join the Standing Committee of Ben Tre Provincial Party Committee and was assigned by the Party to stay in the South to participate in leading the people and women in the province to fight for the implementation of the Geneva Agreements. wok. She was elected Secretary of the Ben Tre Provincial Party Committee.

After joining the leadership of the Dong Khoi movement in 1960, she was a member of the Presidium as soon as the Southern Liberation Front was born. In 1961, she was a member of the 8th Southern Region. In 1965, she was the deputy commander of the armed forces for the liberation of the South, and also the president of the Union of Women for the Liberation of the South. She is a gentle, selfless person who lives close and harmonious with everyone. Relatives and soldiers still call her by the familiar name: “Sister Ba Dinh” and 8 golden words that Uncle Ho gave to Vietnamese women: “Hero, indomitable, loyal, courageous”.

Related Topics:
Up Next 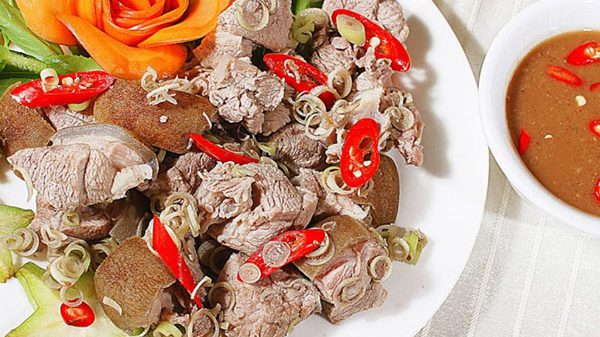